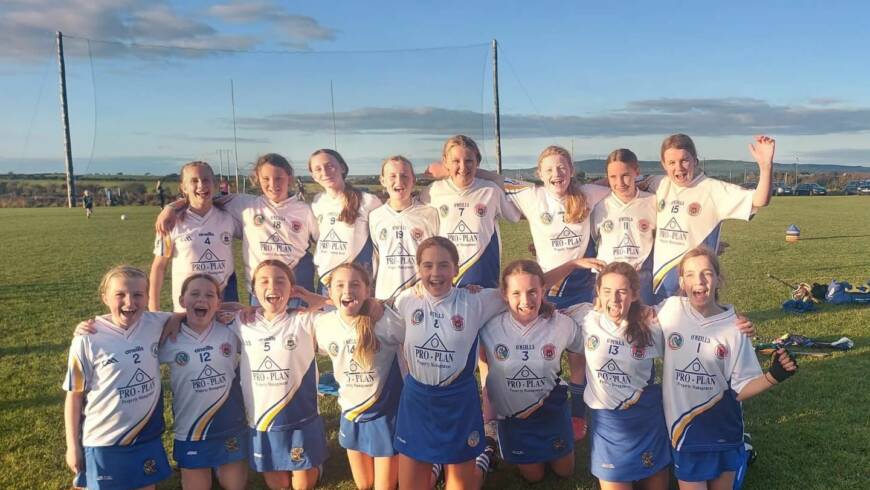 SHARE
U7 Hurling
Our Under 7’s hosted St.Brendan’s Ardfert in Caherslee on Friday evening. Facing a competitive Ardfert side our youngest players put on a display of hurling to rival any club.  Well done boys you should be very proud of yourselves.  The progress made by all players this season is sensational. A round of applause for this week’s players of the week Adam Scott & Evan Lucid, well done boys.
U8 Camogie
Well done to all of our U8s who played in the Tesco County Caman Festival last Saturday. The girls played very well against Abbeykillix and Ballyduff. The girls were very energetic and they played well with the sun beating down on them. Thanks to all the supportive parents and to the county board for organising the event.
U10 Camogie
Congratulations to all the U10 girls also played in Saturdays Tesco County Caman Festival The girls put in a fantastic performance strong opposition from Causeway, Ballyduff and Killarney sides.  The girls were amazing, plenty of scores on the board and had a never give up attitude ! Thank you to the county board for organising and for the certificates and medals.  A great morning of Camogie !
U11 Hurling
Our under 10 and 11 boys travelled to Clonlara to take part in the Jack Moriarty cup at the weekend. Our boys started well and got the better of Wolfetones in their first match.  However, the second match against Clonlara did not go our way but the boys still progressed to the B final against Tulla. Our boys played their hearts out however with a nail biting finish a late goal by Tulla sealed the match for them. We couldn’t be prouder of how our boys represented our club and our county. They acted as true amabassors for Kerry hurling and displayed a level of skill far beyond their years. Thank you to Clonlara for inviting us, hosting and provided us with some much needed refreshments.

The Parnells U11s wearing their new kits kindly sponsored by Garyowen Transport and Expose Beauty as they took part in the Jack Moriarty Cup
U12 Camogie
The Tralee Parnells U12s Blue team were crowned Division 1 Cup winners on Friday evening. Many thanks to Ballyduff for a very sporting game and for organising the pitch on the night. Thank you to Tommy Geurin for referring the game. Well done to all the players for a fantastic end to a great season. All the support on the sideline was greatly appreciated too.  Many congratulations girls 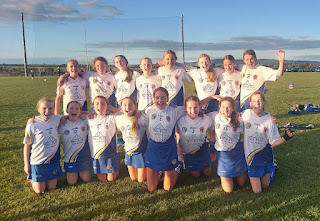 The Tralee Parnells U12 Blue team who won the U12 Division 1 County Camogie Championship
U14 Hurling
The U14 boys faced Firies in Kilmoyley on Sunday morning in the final of the U14 North Kerry B Championship.  After a tight first half where Firies missed a number of chances Parnells had a better second half to beat Firies and were crowned North Kerry B Champions.  Well done boys and to the management team. 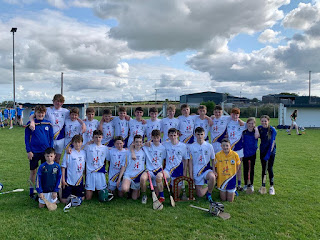 The Tralee Parnells U14 squad with the North Kerry U14 B Hurling Champions Trophy
Minor Camogie
Thank you to all the minor players in Spa Sunday night for your great efforts.  Sadly it was not to be our night, but not for want of trying.  Every player did all that was asked of her and if we had been more fortunate with the great chances created in the first half, it could have been a different outcome.  Despite being behind at the interval, the players did not let this discourage them and they created a number of goal chances in the second half.  One shot by Clodagh was saved by the keeper, but Eugenie was on the spot to pounce and finish to the net on the blocked down ball, to raise the first green flag of the game, drawing huge cheers from the travelling support, and reducing the deficit to just a puck of the ball. In the end, regardless of the final score, the club is very proud of you all.  Several players were returning from injury or recovering from illness, so great credit is due to their dedication and team spirit.  To those who were unable to tog out due to injury, we wish you all speedy recoveries.  It was great to see such strong numbers and unfortunately that also meant not all the under 16s got game time on this occasion. But all of you at the under 16 grade have two more years of minor camogie ahead of you, so keep up the good work.  One factor on the night, was the more fluent team play among the Killarney squad, which comes from all training and playing together regularly. So that is a learning for ourselves, in our preparations next season.  Parnells would like to thank Kerry Wedding Store and Mikey McCarthy for adjudicating player of the match award.   In the end two players could not be separated in their excellent displays.  So Ciara Casey and Alice O’Connell were named as joint and well deserved winners.  A special thank you to all the Parnells volunteer mentors who worked with these players this season.  That is it as far as minor competition goes this year. But stay tuned for upcoming details of the Senior School Cup competition next weekend, to be followed closely by the junior Camogie players panel social event, details to be revealed shortly.  Panel on the night Alice O’Connell, Anna Kerdzaia, Aoife OSullivan, Caoilinn Hickey, Ciara Casey, Clodagh O Sullivan, Ella Breen, Eugenie Kerins, Gráinne Leahy, Kirby Anne Ryan, Nóra Cadogan, Róise O’Donnell, Abbie Canty, Emma Dunican, Gráinne Diggin, Jessica O’Loughlin, Kate O’Loughlin, Labhaoise Mansfield, Lana O Connell, Maeve Trant, Orla Leahy, Rachel Sargent. 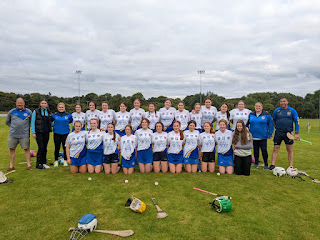 The Tralee Parnells Minor Camogie squad who played Killarney in the County Shield Final on Sunday evening
Junior Camogie
On Tuesday 13th of September Tralee Parnells juniors hosted Causeway in the Camogie County Championship semi-final.  As our season has gone on, we have had a significant amount of attrition across our older squads and numbers on the night were extremely tight.  However, every player present on this occasion put in a great effort and did themselves and their club proud.  Chloe had picked up a hand injury in recent training, but this did not stop her from really putting herself about in the forwards, right from the moment tom Godley threw-in the sliotar, giving inspiration to all those around her.  Jessica O’Loughlin and Ciara Casey made an unbelievable defensive combination, and Causeway must not have been able to believe how many goal chances were thwarted and cleared by this stalwart pair.  Ciara Moloney, Katie Dwyer, Róise O’Donnell and Saoirse Maloney provided strength and experience around the middle of the park and this was certainly needed against the older and stronger visiting side.  These players and those around them worked tirelessly, to disrupt the opposition forward play and to create lots of attacking opportunities, that resulted in well deserved scores for the Parnells.  Following this last game, this is it for 2022 county competitive fixtures for those players over 18, so the club encourages them all to engage with the winter fitness programme, being put in place to help everyone to hit the ground running when we get back to Camogie training next season.  To all those heading off to new horizons after their exams we wish you the very best of luck and to all those unavailable due to injuries we wish you a speedy recovery.   Finally, Tralee Parnells  would like to thank outgoing senior Camogie manager and coach Díarmuid for being with the squad this season and the payers give him a well deserved round of applause, as they gathered to say their goodbyes after the match.  Players on the night: Jessica O’Loughlin, Ciara Casey, Labhaoise Mansfield, Nóra Cadogan, Saoirse Maloney, Róise O’Donnell, Eugenie Kerins, Ciara Moloney, Katie Dwyer, Gráinne Leahy, Caoilinn Hickey, Grainne Diggin, Emma Dunican.
Lotto
Congratulations to Graine Foley Joy and Brian Shanahan who won the lucky dip prizes of €25 each in last Mondays draw. The next draw will take place on 26th September. For just €5 you can be in with three chances of having the winning combination for the jackpot of €1000.  Play via the Clubforce app or follow the link at https://traleeparnells.gaa.ie