After a number of postponements, the Under 16s North Kerry B championship finally took place in Caherslee on Saturday afternoon where Tralee Parnells took on Ballyheigue. It was a tight game for most of the first half but a couple of goals by Parnells towards the end of the first half gave Parnells a bit of breathing room. Half time score 3-05 to 0-07. The second half was again a tight affair but our ability to score goals at crucial times proved the difference. Final score 5-11 to 0-14.  Parnells captain Oisin O Sullivan accepted the John Joe Nolan trophy on behalf of the team.  Well done to Ballyheigue who played well and never gave up until the final whistle.  There were some outstanding performances on the day but Andrew Kerins was on another level and was announced as the man of the match. 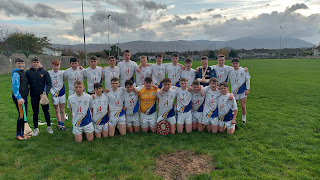 Congratulations to our under 15s who won the Tom Healy memorial tournament in at Abbeydorney GAA at the weekend. The team defeated Crotta in the semi final and Lixnaw in the final. Liam O’Connell won man of the match in the final and it was a clean sweep, as Cian Harris won best goalkeeper of the tournament with Eoghan Costello winning player of the tournament. Many thanks to Abbeydorney club for organising this wonderful tournament.  This caps a phenomenal year for this group of players who also won The County League, Feile Na Gaeil County and Div 3 All Ireland titles.

The club AGM will take place on Friday 18th November 2022 at 7:30 pm in Kerins O’Rahilys Clubhouse.  All members are invited to attend.

Congratulations to Tom Clancy & Michael McCarthy who won the lucky dip prizes of €25 each in last Monday’s draw. The next draw takes place on 21st November. You can play via the Clubforce app or follow the link at https://traleeparnells.gaa.ie

The club are running a last man standing competition during the World Cup.  The rules are simple: pick just one team to win from the first round of matches; if your team wins, you progress to the second round and so on until the Final.  If your team draws or loses, you’re out. You must pick a different team before each round of matches begin.  To enter contact Barry on 087 1546721.  Enter as often as you like for €10.  The prizemoney will be dependent on the number of entries and will be advised before the competition starts. All proceeds will go towards the running of the club’s adult teams.  Please spread the word to friends and family – if you’re not in, you can’t win!.  Closing date is 9pm on the Saturday the 19th of November.

Well done to our U14 and U15 club players who received their All Ireland Camogie medals on Sunday evening at the Rose Hotel. Congratulations to U15 players Abbie Canty and Rachel Sargent. U14 players Anna Chute, Anna O’Sullivan, Caoiloinn Culloo, Orla Costello, Eimear Dillane, Georgie Kennedy, Jessica Leen.