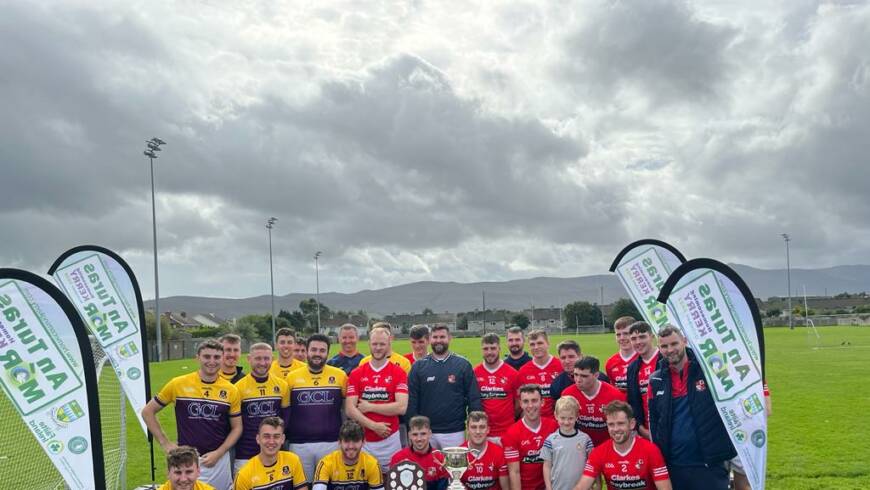 On a sunny Saturday morning the inaugural Tralee Parnells 7 a side senior hurling tournament got under way.  There were five teams in all, Fr Murphys from London, Crusheen from Co Clare,  Dr Crokes from Killarney and the Parnells White and Black teams. The 7 a side format was played on a smaller pitch and led to very exciting fast paced high scoring games.  It was a round-robin format where each team played each other. Crusheen defeated Dr Crokes in the Cup final on a scoreline 8-7 to 7-6.  While Fr Murphys defeated Tralee Parnells in the shield final. Diarmuid Mullins from Crusheen received the Player of the Tournament award. Gavin O’Brien Captain of Crusheen accepted the Cup. John Kehoe from Fr Murphys received the Overseas Player of the Tournament award and also accepted the Shield award.  It was a really enjoyable day and the fine weather also added to the occasion.   All of the visiting teams commented on a very enjoyable day and said that they were looking forward to next year!

A big thank you to the organising committee and especially to Stephen Buttimer and Gearoid O’Doherty.  Thank you to Agnes, Caroline and Lynda for their work and especially for providing sandwiches, buns and lots of other goodies for the visitors on the day.  Thank you also to the youth coaches who acted as umpires and lines people on the day.  The club would also like to thank Kerry County Council for their financial support in running this event.

The tournament was one of the first events as part of the An Turas Mór initiative which aims to bring our diaspora home to Kerry to attend some of the many events that are running during the month of October.  Check out https://homecomingkerry.com/ for more information. 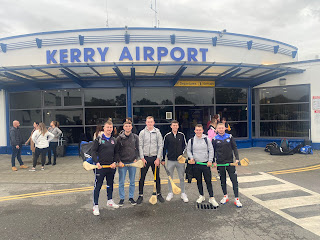 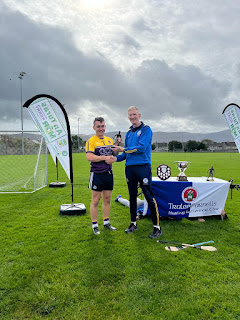 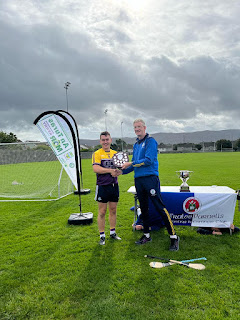 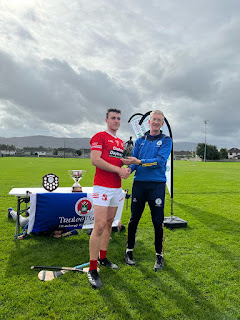 Diarmuid Mullins from Crusheen receiving the Player of the Tournament award 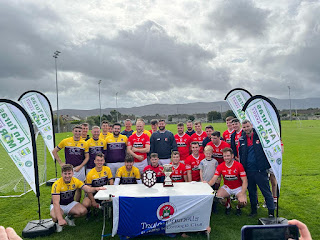 Our U11s travelled this to Killarney on Saturday for the Veronica Stack blitz. It was a great morning of Camogie and the girls gave it their all in each of their games. It was great to have two games against teams from Cork and also against our friendly neighbours Cillard. All games were well contested.  Thank you to Killarney for some lovely refreshments especially the chocolate biscuit cake.  Thanks to all the supporters and the girls who should be very proud this morning as the skill levels have really improved. Well done all.

Well done to our U13 camogie team who made it to the final of the Veronica Stack Blitz in Killarney last Saturday. They had three wins and a draw to Cillard in the group stages but unfortunately Cillard got the better of Parnells in the final game. The final game could have gone either way as Parnells and Cillard were very closely matched. We had a lot of possession but couldn’t quite get the scores deserved.  However, girls didn’t go away completely disappointed as our own Síofra Murphy received the ‘Player of the Tournament’ award as a result of some serious hard work in winning the ball time and time again and passing the ball accurately into the forwards. Well done Síofra and to all the team on a fantastic display of Camogie.

Our under 16s defeated Ballyheigue to make it two wins from two in the North Kerry U16 league. The boys led by nine points to two at half time but Ballyheigue came out a much improved side in second half and outscored Parnell.  Our lads were creating plenty of chances but struggled to make the most of them. A late goal by Parnells resulted in a final score of 1-12 to 1-07

Congratulations to Graine Foley Joy and Joe Costelloe who won the lucky dip prizes of €25 each in last Mondays draw. The next draw will take place on 10th October. For just €5 you can be in with three chances of having the winning combination for the jackpot of €1000.  We also have two guaranteed lucky dip winners in each draw.  Play via the Clubforce app or follow the link at https://traleeparnells.gaa.ie.  Thank you.