By protraleeparnells Tue 3rd May 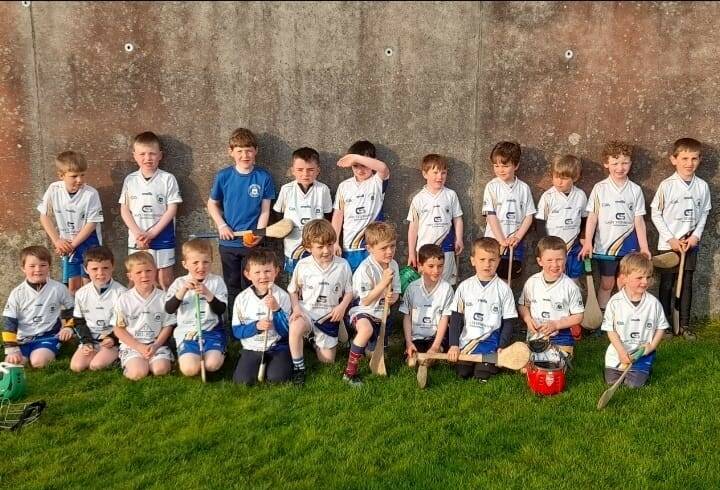 Our Under 7s were away to Abbeydorney last Friday evening for their first match of the season. A milestone for many of our young players as they played their first match in blue and white for Parnells. The Parnells Boys with a strong representation of 21 players provided a fantastic display of hurling to the contingent of supporters who travelled to watch them. Congratulations to this weeks player of the week Seán De Hóra Gumley, well done Seán. 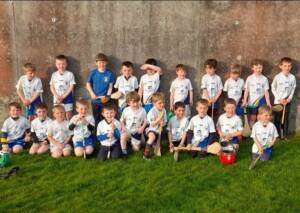 Tralee Parnells U7s line-up after their match away to Abbeydorney
U9 Boys
Our U9s had a great morning’s hurling in Ardfert on Saturday. We were able to field three teams and all of the boys really enjoyed themselves.  There was some great skill and determination on display. Well done to everyone and thank you to St Brendans. 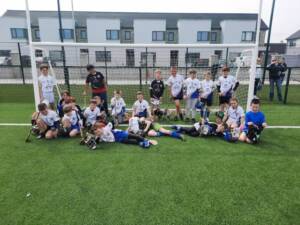 Tralee Parnells U9s unwind after an away match in Ardfert
U12 Girls
Our under 12 Blue and Amber teams started their league campaigns last week.  Both teams were at home as the Amber team played against Killarney while the Blue team were against Causeway. There was a fantastic display of skill and determination by all the girls in both matches.  Killarney claimed the overall victory against the Amber team while the Blue team had a comprehensive win over Causeway.  A special shout out to the U10s who played with the Amber team and were well able to hold their own.  Thank you to Causeway and Killarney for two very sporting games. 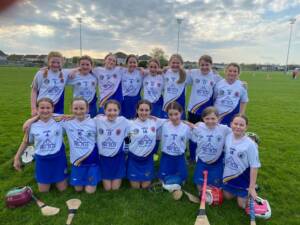 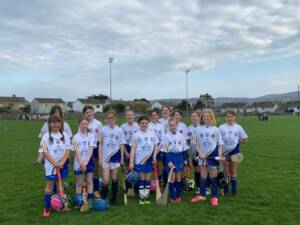 Tralee Parnells U12 Amber Team after their first game in the Div 2 League
U13 Boys
Our U13s put in a strong performance in Ballyheigue on Tuesday evening in the final round of the County league. Our boys were leading at half time but Ballyheigue finished the stronger and ran out winners in the end. The lads left everything on the pitch and was great to see the standard of play increasing with each game. Final score Ballyheigue 5-05 to Parnells 3-01. 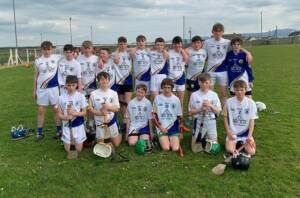 Tralee Parnells U13s who played Ballyheigue in the County League
Camogie Feile
The U15 and U13 Camogie teams combined to take part in the Feile na Gaeil competition at the weekend.  They girls were up against tough opposition from Killarney, Causeway and CillArd. They showed great spirit and workrate and enjoyed the challenge. It was a great learning experience for all. We wish our injured teammate Georgia a speedy recovery.

The Tralee Parnells U13s and U15s who represented Tralee Parnells in the Camogie Féile competition at the weekend
Hurling Feile
The boys were busy last week with two Feile na Gaeil matches.  On Monday evening they put in a strong performance away to Ballyheigue.  With great hunger shown to find the net the boys had a comfortable win. However, round three on Friday evening in Caherslee against Ballyduff was a different affair. From the first whistle the Ballyduff lads were more aggressive and raced into an early lead, one they were never going to loose.  Our lads got back into the game but had too much to do. Final score: Tralee Parnells 0-08 Ballyduff 3-11

Tralee Parnells U15s who played Ballyduff in round 3 of the Feile Competition
Scór na nÓg
Our Trath na gCeist team of Donnacha, Oisin, Brian and Dan acquitted themselves excellently in the All-Ireland Scór na nÓg finals in Killarney on Sunday. Up against the best quiz brains from around the country, the lads finished 4th of 12 teams, agonisingly missing out on the stage final by 5 points. Well done to the team and their coach, Damien on getting to this stage and for the practice they put in over the past few months. All team members are underage again next year, so b’fheidir beidh lá eile acu!
Senior Hurling
The Parnells Senior hurlers played Causeway at home in Caherslee on Friday evening. This was round seven of the County Senior Hurling League.  The visitors took an early lead with a free and point from play.  Darrgah Reen opened his tally for Parnells with a point from a tight angle from play just afterwards. Causeway were finding their scores more easily as they scored three points from play.  However, with Causeway conceding a number of frees our reliable free taker Gearoid O’Doherty (Doc) hit three of them over the bar to keep Parnells in touch.  Just before half time a point blank shot at goal blocked by our stallworth goalie Mark Ryall was unfortunately sent to the back of the net on the rebound. Half time: Tralee Parnells 0-5 Causeway 1-7.
The second half started similar to the first with the visitors having a slight advantage in possession and scores.  A number of points from play from Darragh Reen and frees from Doc ensured that Parnells were never too far behind.  As the game developed and with the help of some fresh legs Parnells took more control of the game. With a point from Tagh Reen and a fantastic goal from his bother Darragh shortly afterwards the gap had closed to just two points.  Unfortunately, time had run out with the visitors taking the victory. Full time score: Tralee Parnells 1-12 Causeway 1-14.
Team as they lined out: Mark Ryall, Jack Doyle, Tim Kelliher, Stephen Morrissey, Darragh Maloney, Ruairi O’Sullivan, Cillian O’Riordan, Cathal Dunne, Cillian Litchfield, Barry Lyons, Tadgh Reen(0-1), Andrew Morrissey, Gearoid O’Doherty(0-8F), Darragh Reen(1-3), Paul Daly.  Substitutions: Stephen Ryan for Paul Daly, Jerome Daly for Cillian O’Riordan, Conor Brick for Barry Lyons.
Sympathies

Tralee Parnells would like to express our sincere sympathy to the family of Joe Healy.  The club often called on the services of Joe for various photo opportunities.  Joe was always very obliging and extremely skilled at his profession and will be sadly missed. Ar dheis Dé go raibh a h-anam dílí.