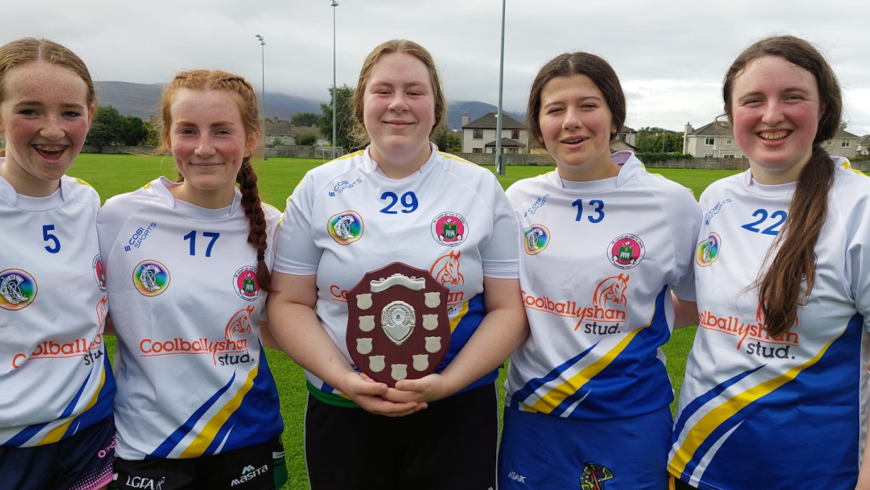 An Turas Mór is a call to our diaspora from all aspects of Kerry Business, Tourism, Sports and Cultural organisations spearheaded by Kerry County Council to come home and enjoy close to forty events and activities that will take place throughout the County during the month of October.

As part of this initiative, Parnells will host our inaugural seven-a-side Senior Hurling tournament on Saturday October 1st in Caherslee. The organising committee are busy liaising with clubs to finalise the list of participants.  At the moment we are delighted to confirm that Fr. Murphy’s Hurling Club from London will be in Tralee for the weekend. Keep watching our Social Media pages and our website for full details of what promises to be an exciting day of hurling.

Tralee Parnell’s under 7’s were back in action training in Caherslee on Friday evening.  The boys are really giving it their all as they move into their last few weeks of the season.  The progress and skills they have developed this season are a credit to the club and were a beauty to watch as they finished training with a fun filled hurling match. Congratulations to this week’s players of the week, Jack Whelan and Noah Kirby.  Well done boys.

The U8 Camogie squad had their final training session of the season on Friday evening in Caherslee. Manager Hazel O’Leary said “It was a pleasure to coach all the girls and to see their progress over the past six months. The girls are a fantastic bunch and they always had great energy. Thank you to the parents for bringing the girls all over the county and to our youth coaches Caoilinn and Darragh. Best of luck to the girls that are moving up to U10s ! ”.

A number of the Tralee Parnells U13 girls enjoyed a great morning of camogie in Kilmoyley on Saturday at the inaugural Aoibheann Duffy memorial blitz. The girls and mentors were treated to wonderful hospitality by CillArd Camogie. A great experience for everyone.

The U14 Amber team put in a massive team effort last Tuesday night in Caherslee as they contested the Division 2 County Camogie final. The girls fought for every ball until the very last second of the game. The managers were delighted with the performance especially in how the team continued to push forward and try to win as much possession as possible. The scoreboard didn’t reflect the effort by all players with their passion and never say die attitude being the outstanding feature of the evening. Head coach Martina Lawless said afterwards “Well done girls on a massive effort.  As a team they have improved such a lot since the start of the season. They should be proud of themselves.  A big thank you to the parents for bringing the girls to training every week and to the other coaches (including Alan, now in Canada) and all club members and parents who supported us on the sideline and who sent lovely messages before and after the game”.

The Blue team were also in action as they contested the Division 1 final against Cillard.  This was a cracking game where our girls started slowly but gained a foothold and finished the first half strong and at half time we were down by just a single point 1-03 to 0-05.

In a rip roaring second half Cillard again started the stronger and went five point up. Our girls never stopped fighting however and heading into injury time we were just two points down. Our girls pressed for a winning goal but phenomenal goalkeeping and defending from Cillard kept our girls at bay. A 65meter free from Anna Chute was tipped over the bar to leave just one point between the teams but unfortunately referee John Ross blew the final whistle to the delight of the Cillard players and their supporters. Final score 1-08 to 2-06.  Congratulations to Cillard and well done to both teams for what was a fantastic game of camogie. 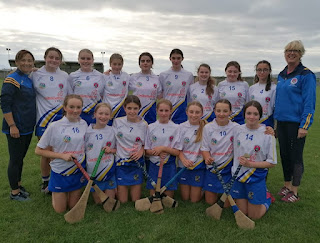 The second annual Tralee Parnells Senior Schools Camogie Tournament was played in Caherslee at the weekend and saw new winners in all categories.  The title holders Mounthawk faced a strong challenge from a combined team that had players from Presentation, Castleisland and beyond in their lineup.  Having put their heads together and come up with the team name Community of Nuns, they were confident enough to forego the usual decision of which side would wear bibs and confidently took to the field in navy worn outside the new Parnells jerseys, as they faced the Mounthawk side who had won so impressively in 2021.  From the throw-in, it was a fast paced and high scoring tournament on all sides, across all three legs.  The mentors were impressed with the skills on display and by the obvious improvement this season in several of the younger players who are stepping up to represent their schools at the senior age category.  The whole Tournament was played in a competitive sporting spirit across all the games and it was great to see the players enjoying expressing themselves on the field of play and working for each other.

There was silverware up for grabs across a number of categories and the perpetual trophies will all have new names engraved.  The overall Senior Schools trophy was presented to the victorious Community of Nuns team, who had seen great contributions from the players in their ranks.  Captain Clodagh O Sullivan accepted the trophy on behalf of her team.

There were a number of other trophies to be presented and next up was Orla Leahy who was the overall tournament top scorer across the different matches, with an impressive tally of goals and points. No surprise to the spectators, who had witnessed Orla’s impressive work rate, skill and judgement.  Several competitors racked up strong scores in the next category, but the player who got the highest number of points awarded for skills displayed throughout the tournament, was Rachel Sargent.

The next trophy to be presented was the player voted as having made the best contribution across the games by all her peers and another worthy winner here was Emma Dunican.  A new category was the most improved young player and this honour went to Orla Buttimer who as an under 14 really impressed the onlookers with her contribution and determination all morning.

We congratulate all the winners on their well deserved awards.  We also would like to sincerely thank our generous sponsors at Cobi Sports, Coolballyshan stud and Fairies Cross Medical Centre.  It was lovely to see the colourful logos on the new sponsored jerseys that the players were able to show off in the Tournament photos.   A big thank you to the volunteers and parents who helped in the running of the tournament and provided delicious and nutritious snacks for the competitors.  Finally, a special word of thanks to Carmel O’Shea-Maloney, for organising officiating and running the Tralee Parnells Senior Schools Tournament for 2022.

The next draw will take place on Monday evening of this week at 8pm. For just €5 you can be in with three chances of having the winning combination for the jackpot.  Two luck dip winners will receive €25 each.  Play via the Clubforce app or follow the link at https://traleeparnells.gaa.ie. All support is greatly appreciated, thank you