By protraleeparnells Tue 24th May 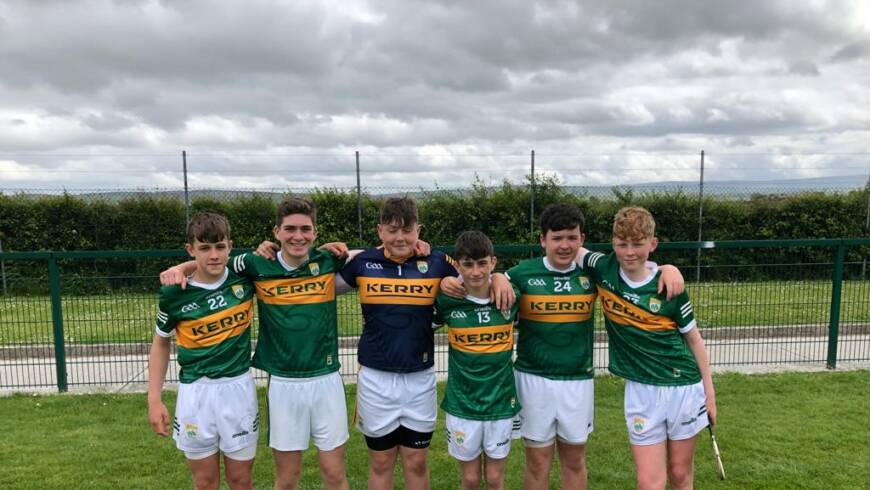 The U12s Blue Team came away with a strong home win against a very gallant Killarney team in the Division 1 league. The Blues are improving with every game which is great to see. Thank you to all the supporters and to Killarney for making the trip to Caherslee. Both of the U12 teams will face Abbeykillix in Lixnaw 6pm on Monday evening (23rd).

Our U14s travelled to Tournafulla on Sat 21st for a very enjoyable challenge game and were treated to wonderful Tournafulla hospitality.  Thanks to all who travelled. It was a great opportunity for our girls to try new positions on the pitch and to meet and mix with players from another County. Thanks to all involved in Tournafulla GAA.

Congratulations to our juvenile members who represented our county over the past week. Our U14 boys, Luke Hanafin, David Sargent and Kyle Benson played for Kerry against Clare on Saturday in their first development match of the season, at the Clare GAA Centre of the Excellence.  Kerry led from the start to finish and were well deserving of their win.

Anna O’Sullivan was on the winning the ladies football U14 A Kerry team who defeated Cork in the all Ireland final on Saturday.  It was an epic battle as the game went to extra time with Kerry winning by two points in the end.

Our U15 representatives William Sommers,  Dan Maloney, Cian Harris, Eoghan Costello, Thomas O’Connell and Jack Canty had a convincing win over Kildare in Lixnaw in round two of the academy fixtures on Sunday.

Congratulations to all players. 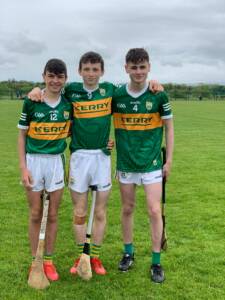 Tralee Parnells U14 Boys Luke Hanafin, David Sargent and Kyle Benson who played for Kerry in the first development match of the season 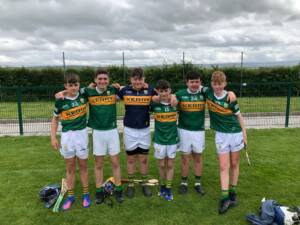 Tralee Parnells U17s played their re-fixed division 2 county league game in Abbeydorney against the home team last Friday evening. This was the final league fixture for both sides and both teams knew a win would guarantee them a place in the knock-out phase of the competition. For the loser, the league campaign was over. With many of the Parnells panel unavailable for various reasons, the management team called up a number of the U15 players from the victorious Feile team and they weren’t found wanting. This certainly was a game of two halves. Parnells played with the aid of a strong wind in the first half which certainly helped their cause. After Oisín O’Sullivan had opened the scoring with a pointed free, a speculative shot from out the field from Seán Barrett, a welcome return to the team after a long absence, ended up in the Abbeydorney net. From there, Parnells drove on and wing back Barry Hamilton was causing all sorts of problems for the home defence as he hit 3 super points from play in quick succession. Full forward Eoghan Costello, who was a handful all evening, got on the end of a clever pass from Donnacha Buttimer and rattled the net, despite Abbeydorney defenders hanging off him. Oisín added another couple of frees before another long range shot finished in the net, this time from Rory Reen, who was outstanding at centre-back, showing no signs of the injury that forced his withdrawal the previous week. The Parnells defence held firm throughout the first half, despite many Abbeydorney attacks and restricted them to a solitary point from play.

Parnells expected a fightback from Abbeydorney in the second half and that’s exactly what materialised. Wave after wave of Abbeydorney attacks had the Parnells defence under constant pressure but they dealt admirably with it. Cian Harris was a rock in the Parnells goal, saving his team on a number of occasions, including one full length diving save, which drew gasps from the crowd. Abbeydorney started to make inroads into the deficit with a number of pointed frees and ’65s. Like the first half, a floated shot from out the field ended up in the net, to give Abbeydorney hope. However, that was to be their only goal as the fullback line of William O’Donoghue, John Joe Hanafin and Liam Cooper stood firm. In the half-back line, Cian Hennessy was having a fine battle with his namesake, Kerry minor, Cian Sheehan with Hennessy coming out on top. Midfielders Dan Maloney and Oisín put in a great 60 minutes effort, covering an amount of ground. In fact, Oisin made a number of solo runs to lift the siege, one of which resulted in a great point. The half-forward line of Mark Lynch, Diarmuid Galvin and Barrett were always available to help out the defence and combined well to supply the forward line of Dylan Cunningham, Costello and sub Jack Canty. Abbeydorney hit over some fine points from play as the Parnells boys tired. They kept attacking to the very end and had a chance to steal the victory with a great catch and turn by their substitute full-forward which was excellently parried by Harris in the Parnells goal.  The final whistle followed and Parnells had emerged with a deserved victory, against the odds. Well done to the team and Management and they await details of their semi-final opponents, with the match to be played on Sunday 29th May

Congratulations to our County panellists Tadhg Brick, Brian Lonergan, Luke Barrett, Morgan Madden, Darragh Reen, Cathal Dunne and all the Kerry hurlers and the management team on reaching the Joe McDonagh final after a great win away to Antrim at the weekend. We wish them all the best of luck in their preparations for the final on June 4th.  The club are planning to hire a bus to travel to Croke Park for the final.   Please contact David at 085 1355566 if interested.

The club will be holding a quiz night in O’Donnells bar Mounthawk on Friday the 3rd of June at 8pm. The number of tables are limited so text Natalie at 086 8059666 to reserve your place. There will be lots of prizes on the night.  A table of four for €40.  All money raised will go towards sending our Under 15s to the Feile na nGael finals in June.

The booking link is now active on our social media pages for the Parnells Summer camp.  The camp is for boys and girls aged 5 to 13 and will run from Monday 18th to Thursday 21st of July, 10 to 1pm.

We will soon launch a regular lotto draw to support the day to day running of the club.  We will also soon launch a website as one stop shop to find information on the club.  Keep an eye our social media pages and the weekly notes for more details on these exciting developments.