By protraleeparnells Mon 16th May 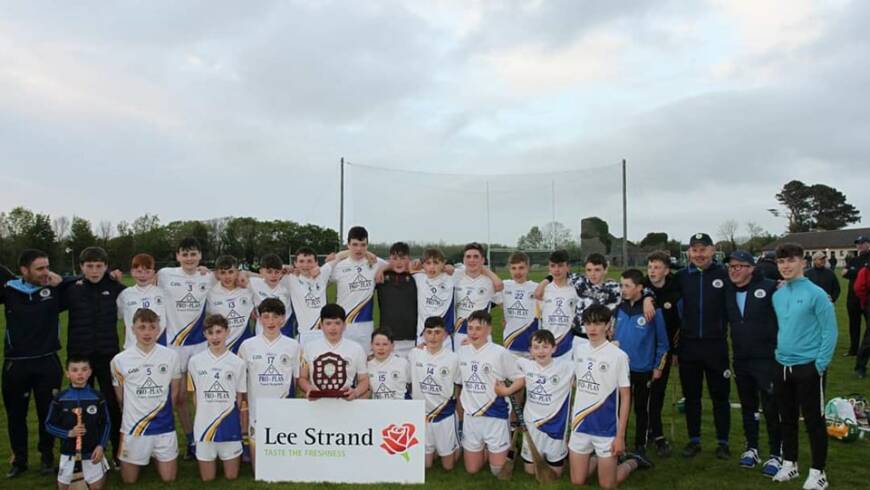 What a week for our U15 hurlers.  The boys reached the Kerry Féile na nGael A final after defeating Crotta on Wednesday night at home in Caherslee.  The final was against Ballyduff and was hosted in Lixnaw on Friday evening.  As Parnells suffered a heavy defeat to Ballyduff in the round-robin series a few weeks ago we knew that this was going to be a tough ask.  Both sides put in phenomenal performances to give us a thrilling final.  Parnells took some time to settle as Ballyduff got off to the better start and put three points on the scoreboard.  However, a scramble in front of goal allowed William Sommers to find the back of the net to level the game.  From here Parnells were spurred on to attack for more scores. What followed was a thrilling second quarter full of intensity and hunger from both sides. William Sommers found the net for a second time and with some points from Liam O’Connell, Fionan Ryan and frees from Eoin Costelloe, Parnells had created a nice half time lead.  Halftime score Parnells 2-06 Ballyduff 1-04.  After an intense first half questions were asked if it would be possible to keep it up for the second half and we were not to be disappointed.  As expected, Ballyduff came out attacking with real intensity to try close the gap.  Wave after wave of attack was deflected by a very solid Parnells defence.  On one occasion the attack lead to Parnells conceding a penalty.  Our stalworth goalie Cian Harris deflected the shot at goal but the following loose ball looked a certain goal as Ballyduff were first to the ball.  However, a brave deflection from Sean Michael Redican saved the day as the resulting 65 was put wide.  Ballyduff were not going to go down without a fight however as the onslaught and brave Parnells defence continued.  Both sides continued to play with high intensity with Ballyduff gaining a few points to close the gap to a single point.  Our youngest player Luke Hannafin suffered a dangerous strike to the body at this time but was quick to get to his feet.  Free taker Dan Maloney tapped the ball to an unmarked Liam Cooper to add a point to Parnells tally.  This was soon followed by a score from play from Eoin Costelloe to widen the gap to two points. The intensity continued but our boys fought hard and worked like a team right to final whistle.  Final score: Tralee Parnells 2-08 Ballyduff 1-10.  All fifteen players gave a fantastic performance and left everything on the pitch in a wonderful display of workrate, hunger, belief and team work.  Brian and the rest of management team deserve a lot of credit for their work and the guidance given to the boys.  The result is a fantastic and significant achievement for the club as it marks it’s 10 year anniversary as most of these boys would have started playing around that time.   Plans are already under way for the Féile na nGael finals in Co Meath at the end of June.  Some fundraising events to support the trip will be announced in the coming days.
Starting 15: Cian Harris, David Moore, Kyle Benson, Sean Michael Redican, Liam Cooper, Brian Reidy, Tomas O’Connell (Captain), David Sargent, Liam O’Connell, Christian Kennedy, Dan Moloney, Luke Hannafin, William Sommers, Eoghan Costello, Fionan Ryan.
Substitutes: Sean Sargent, Jack Canty, Jack Shanahan, Daniel Spring, Ryan Sheehy, Karl Cronin, Cathal Fitzgerald, Conor Dennehy, Adam O’Flaherty. 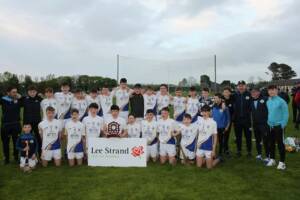 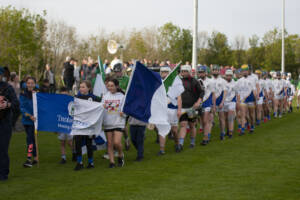 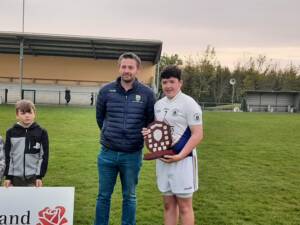 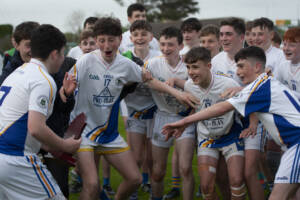 U7 Hurling
Training continued for Tralee Parnells Under 7’s last Friday in Caherslee, with a few fresh faces joining the ranks the boys flew through the drills with confidence.  They thoroughly enjoyed the training session and rounded it off with a few mighty hurling matches. Congratulations to this weeks player of the week Cormac Hoffman, well done Cormac.
U9 Hurling
Our U9s had a wonderful afternoon of hurling at half time in the Joe McDonagh match at Austin Stack Park where Kerry played Offaly. Our Under 9s got to show their skills to the big crowd in attendance. We hope the boys enjoyed the day and look forward to the day when they are part of the main event. 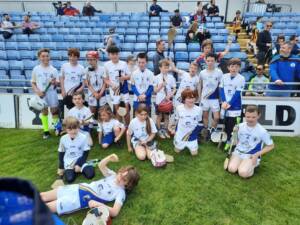 U14 Camogie
Parnells Under 14 camogie fielded two teams in round 1 of the U14 league Tuesday evening.  The blue team had a winning start as they played away to Causeway. They showed the grit and determination that we’re used to see from this team to finish strongly having been a goal down at half time. Well done girls on a fine display of stamina and determination.  Many of them had been on an active school tour all day only arriving home shortly before throw in.
Meanwhile the amber team played Cillard in Kilmoyley. Whilst Cillard had a very strong team, the girls battled on through the first half against the wind showing great determination to win more ball and it paid off in the second half with a few nice points scored from play. However, unfortunately this was not enough to win the match. There was a minutes silence at the start of our game to remember Aoibheann Duffy, whose anniversary is today. She would have been playing with the Cillard team, it was fitting for her to be remembered by all of her team mates and the greater camogie community. 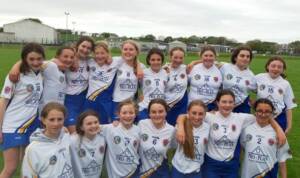 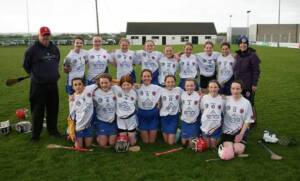 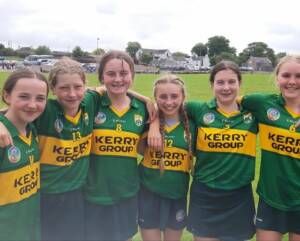 Minor Hurling
A depleted minor team reliant on three brave U15s had a narrow defeat to Ballyheigue.  Kyle Benson, Tomas O Connell and Cian Harris answered the call to fill the shoes of the many U17s who were unavailable.  Cian is playing the hurling of his life and picked up where he left off a few nights previously in the historic Feile win.  Ben Cullinane continues to grow into a skilful cornerback. Tomas O’Connell moved from full back to full forward and scored a rocket of a goal. Kyle Benson defended the other corner in style. At wingback Cian Hennessy put in his best performance to date. Rory Reen was solid and only for going off injured in the last 10 minutes may have been a different result, there was no replacement available for Rory and this left us down a man. Barry Hamilton continues with his characteristic surge forward runs. At midfield Andrew Kerins played with his usual warrior attitude and played with the obvious passion he feels for the game. Osin O Sullivan free taking practice paid off and kept our scores ticking over and an excellently taken penalty. New hurlers Mark Lynch and Dairmuid Galvin are a joy to work with and making strides of progress with Mark getting on the scoreboard and Diarmuid driving through on solo runs. As instructed, Oran Murphy increased his involvement and was unlucky not to score at times. Inside forward Odhran Kerins belied carrying an injury and played a great game.  Donnacha Buttimer as always played his heart out.  Final score Tralee Parnell 2-9 Ballyheigue 2-11
Junior Hurling
Our Junior hurling team will play St Brendans of Ardfert on Monday evening 16th May at 7:45pm in Caherslee. Best of luck to the team.
Kerry Senior Hurlers
This season the Kerry Senior hurling squad are holding a training session at each club with county representation.  This week it is the turn of Parnells, as the squad will be training in Caherslee on Tuesday evening from 7pm. All hurling supporters are welcome to come along to meet, get an autograph or take a picture with the county stars including our own Brian, Cathal, Darragh, Luke, Morgan or Tadhg.
Fundraising Workshop
Kilcummin have kindly agreed to share their fundraising experiences with Tralee Parnells.  As we need to raise substantial funds to find our own grounds…etc this is an important meeting.  All members of the club are invited to join this meeting which takes place on Monday 16th from 8 to 9pm at Kerins O’Rahillys Clubhouse.
Summer Camp
The Parnells Summer camp for boy and girls age 5 to 13 will run from Monday 18th to Thursday 21st of July, 10 to 1pm. Watch our social media pages where the booking will available in the next few days.
Sympathy

Tralee Parnells Hurling & Camogie Club would like to extend our sincere sympathies to Joe Wallace on the recent passing of his brother Gerard.  Ar dheis Dé go raibh a anam dílís.