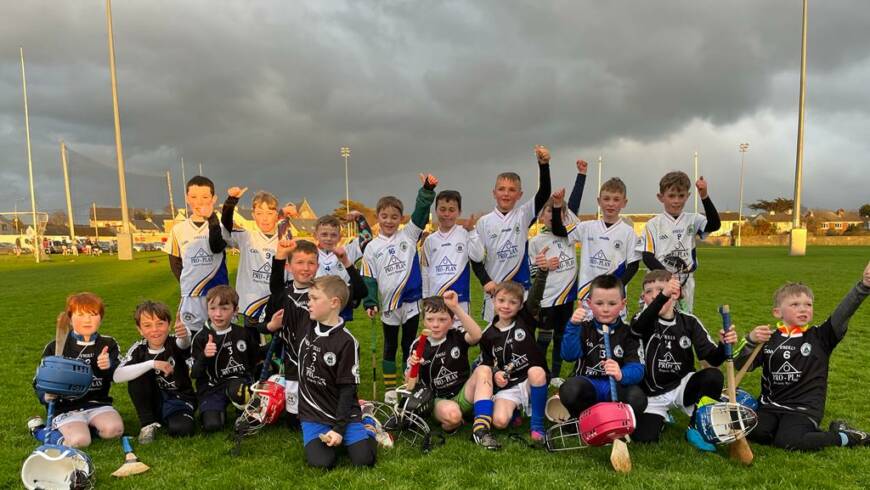 Tralee Parnells Under 7’s players had a fantastic training session in Caherslee last Friday, they breezed through the drills with confidence and played their hearts out in the matches that followed. Many thanks to all of the parents who took part in our Come Hurl with me segment. Congratulations to this weeks player of the week Noel Harty, well done Noel.

A fantastic effort put in by every one of our U8s girls at Friday nights training session. The coach was delighted with the energy levels and smiles on the girls faces. Olivia Moynihan was the first to receive the player of the week trophy. Well done Olivia.

The U15s had a win in their first match of the Division 1 league when they played away to Crotta on Friday evening. Thanks to a great team performance the final score was Tralee Parnells 5-11 Crotta O’Neills 2-12. The league will be on hold for a few weeks now as the boys take part in the Feile competition. Their first Feile match is due to take place on Friday 15th April against Lixnaw.

In another first for our Senior hurlers, our B team had their very first outing in the South Kerry League last Friday evening in Rathmore. On an evening of firsts, it was also Parnells’ first ever match vs Rathmore in their debut year as a Senior hurling club. To mark the occasion, our captain, Ronan Gilsenan, presented Rathmore with a specially commissioned plaque to mark the occasion. When the match got underway, no quarter was asked or given. Parnells played against a strong breeze in the first half and went behind to an early goal. However, they quickly replied when Paul Daly netted from a close range free. Rathmore had a second goal soon after, due to some lax Parnells defending. A long range shot from Andrew Morrissey found its way to the net so at half time, Parnells were only a point behind 2-5 to 2-4. The Parnells lads lifted their game in the second half and really responded to the half time team talk. Darragh Maloney, who was a threat all evening, carved his way up the left wing and netted a great goal to give Parnells a 3 point lead with 10 mins left. However, Rathmore showed their resilience by getting the last 3 points to secure a draw, which was probably a fair reflection of the play. This was the Parnells B team first outing of the year with the return of some old faces to the team, so no doubt this match will stand to them. Next up is a home match on Good Friday vs St Pats, East Kerry. Final score: Tralee Parnells 3-8 Rathmore 2-11. 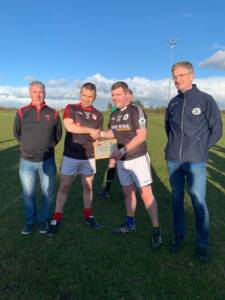 Congratulations to our U17 players Oran Murphy, Sean Naughton, Odhran Kerins and Donncha Buttimer who were part of the victorious Mercy Mounthawk team that won the Munster U16.5 Frewen Cup for the first time last Friday. Comhgairdeachas libh!

On a glorious sunny Saturday afternoon Tralee Parnells hosted a fun day for the families from Ukraine that are currently staying in Tralee. We had a large attendance of visitors and Parnells members alike. With some guidance from coach Diarmuid Brennan the visitors tried their hand at hurling with many showing great potential. There were also a number of other fun games for the children such as toss the bean bag. Our recently acquired water boiler which was kindly sponsored by Eamon Costello Construction was put to good use as teas and coffees were served for the adults. There were lots of smiles all around as everybody seemed to enjoy the occasion. After taking some photographs it was time to say goodbye as O’Flahertys provided complimentary transport to bring the families to their accommodation in Tralee. 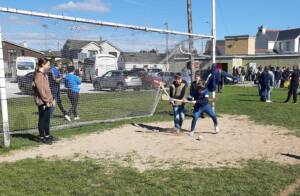 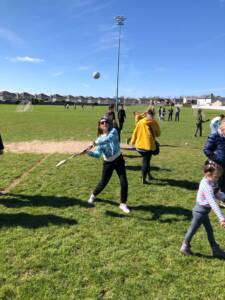 With Tralee Parnells now fielding adult and minor Camogie teams for the past few years after growing our playing numbers through our nursery and underage structures, some our members have been researching the history of Camogie in the Tralee area.

When Tralee Parnells was re-founded in 2012, at our inaugural AGM the first person nominated and ratified was Eileen Cotter RIP as club President. Eileen sadly passed away in 2017 having served with distinction as Tralee Parnells President for our early years as a re-established club. In a significant link to the distinguished history of hurling in Tralee, Eileen and family have strong connections to the men’s team that won the county championship for Parnells a century ago in 1918 and 1919. Eileen’s father (Jerry ‘Unke’ O Connor) was part of the Parnells team that won county hurling championships a century ago. Eileen’s son Dermot was regularly to be seen accompanying Eileen to Parnells events in recent years.

Parnells are delighted to have a copy of a photograph of the men’s team that won the 1918 and 1919 county hurling championship. But what we discovered recently is that Tralee Camogie was also flourishing in those early years. Thanks to Dermot Cotter, we have copies of 1925 newspaper reports, with a team sheet and also a match report in that year, when Tralee faced the more established Listowel Camogie team. From these sources, we see that there were family links between a number of members of the Tralee Parnells men’s and women’s teams. Dermot Cotter’s grandaunt was Nance O’Connor (sister of his Grandfather Jerry “Unke” O’Connor). The captain of the team was Sally Sheehy, sister of John Joe. So we can see there were good family links between the Parnell hurlers and the Camogie team.

So now Tralee Parnells would like to issue an appeal to the public and in particular to anyone interested in and familiar with the history of local sports. If anyone can help us locate a copy of this photo, we would be delighted to hear from them. People can reach us by email to PRO.TraleeParnells.Kerry@GAA.ie or through our social media, or indeed just make contact with any club officer. 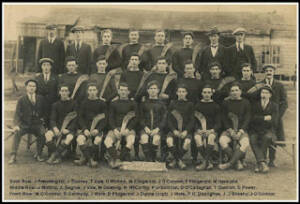 Win a House in Killarney

The Kerry GAA win a house competition closing date has been extended to the Tuesday 26th July (2 days after the All Ireland Football Final). There is now an option to split the payments for the €100 ticket. Visit winahousewithkerrygaa.ie/win-a-house for more details. Remember, when you enter, to name Tralee Parnells as your club there is a chance of winning some club prizes.